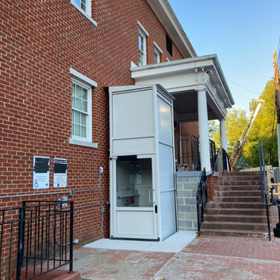 Congratulations to our dealer United Elevator Services for winning project of the month of September! Two vertical platform lifts were installed by the team. Both are enclosure models. These were two separate projects, one for a residential property and the other for a commercial application. The projects do, however, share a ‘common thread.’ They are both examples of people thinking ahead and making plans for the future. 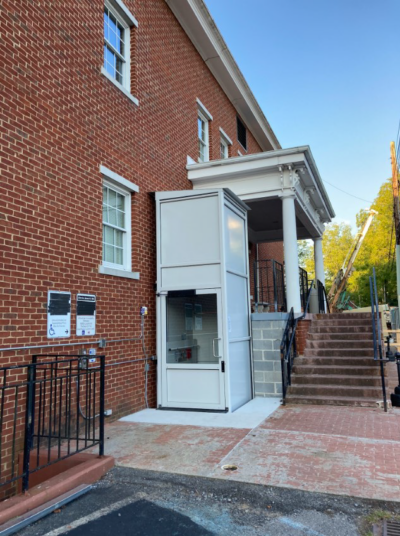 The private residence is in the exceedingly small city of Watauga, TN, which spans a tiny portion of both Carter and Washington counties. Population is less than five hundred. Many years back a youthful couple built their brick, raised-ranch style home in this quiet community. While they were young and able bodied at the time, the husband – a builder, had the fore-sight to realize that father time waits on no one. He made provision in the foyer of their home for a lift to be installed when the time came. He passed away before reaching his golden years, and well before they would need the lift. Time moved on, and his beloved wife was now ready for the lift to be installed. Because of his planning ahead, there was plenty of space and the lift was just what he envisioned.

The second VPL is for a County Courthouse in Virginia. The old courthouse was built in the late 1800’s after the original burned down in December of 1864. The courthouse has seen some upgrades and additions over the years. As the region has grown, there has come the need for major expansion and renovation. The project would include the addition of a parking garage, sally port, and an entire new floor added atop the existing facility, indeed a major undertaking. The existing elevators, added during a previous renovation would be insufficient.

There was a slight catch… the courthouse needed to remain operational as much as possible. Meaning the courthouse needed to remain accessible. This is where the forward thinking and planning came in to play. The planners decided on a strategically placed lift, near one of the old elevators. We coordinated with the general contractor, specified, and installed a lift to meet the need.

The lift provides the necessary accessibility and allows the courthouse to continue operation during this current major expansion and renovation project. 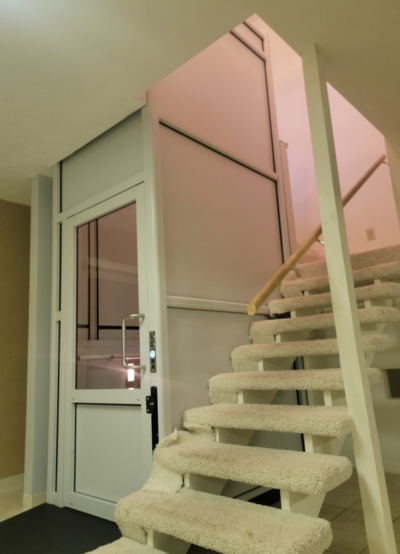 Thank you United Elevator Services for this fantastic installation and for carrying forward the Garaventa Lift brand!

About the Genesis Enclosure:

The Genesis Enclosure Model is a vertical platform wheelchair lift that provides access in private or commercial buildings. No shaft construction is needed, and a variety of optional features allow for extensive customization for your individual project.

Did you install an outstanding lift recently? Do you think one of your projects deserves to be Project of the Month? Send us pictures and a short story of your latest project at marketing@garaventalift.com